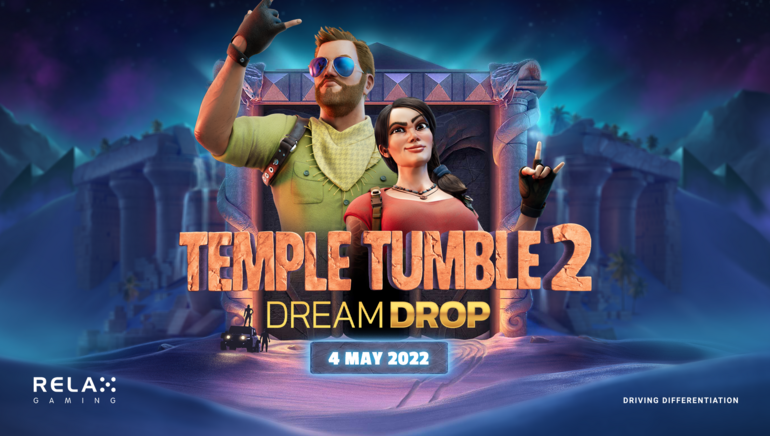 Relax Gaming continues to release new slots and enhance its already impressive collection of mobile-friendly games. Temple Tumble was a major hit for the company and the slot is enjoyed by millions of people at leading online casinos. The success of the original release has inspired the software developer to produce a sequel, inspired by the same exciting Egyptian landscape. Players can now experience the thrills of Temple Tumble 2 Dream Drop, a modern slot with an unmistakable charm.

Temple Tumble 2 Dream Drop might be a sequel to a popular game, but it is also a pioneer for the software developer. This is the first game in their portfolio to use the Dream Drop Jackpots mechanic, which promises big winnings for lucky players. Those who land six Dream Drop symbols will activate the progressive jackpot, in a randomly triggered jackpot entry spin. Set in the same exciting backdrop of ancient Egypt, the game seamlessly incorporates the new mechanic into proven gameplay.

Relax Gaming brilliantly succeeds at capturing the very essence of the original, while creating an adventure-packed sequel rich in appealing features. Punters can hope to unlock free spins, trigger multipliers that boost profits and activate the tumbles that inspired the name of the slot. Six free spins are offered when all the stone blocks in the main game crumble and during the bonus rounds, punters can unlock extra spins, persistent wilds, and higher-paying multipliers.

Temple Tumble 2 Dream Drop is a Candidate for Awards

Relax Gaming has recently celebrated two decades of existence, with thousands of amazing games released since 2001. While regarded as one of the preeminent B2B suppliers, the company has claimed a massive 10 awards in 2021 alone. This year promises to be just as good, with many more nominations expected, for unique and immersive content. Temple Tumble 2 Dream Drop is a strong candidate for such prizes that celebrate originality in developing mobile-friendly slots.

Simon Hammon, Chief Product Officer at Relax Gaming announced the official release of Temple Tumble 2 Dream Drop. He celebrated the achievements of the development and design teams that diligently worked to create such a gem of a mobile slot. He used the opportunity to reaffirm the commitment to create engaging and original content, enhanced by special game features. For the time being, Temple Tumble 2 Dream Drop can be enjoyed at leading casinos powered by their software.