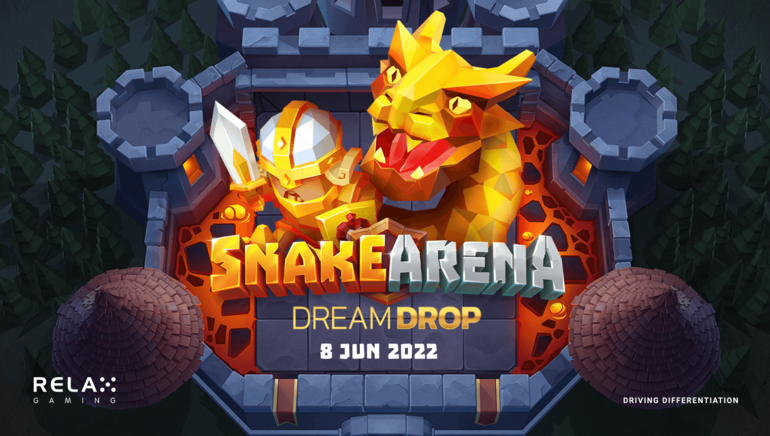 Relax Gaming has combined one of its most popular slots, Snake Arena, with its successful jackpot concept, Dream Drop. Relax has used its Dream Drop mechanism in previous slots, and its newest one is Snake Arena Dream Drop, which rolled out in early June.

Relax Gaming has combined one of its most popular slots, Snake Arena, with its successful jackpot concept, Dream Drop. Relax has used its Dream Drop mechanism in previous slots, and its newest one is Snake Arena Dream Drop, which rolled out last week.

The original Snake Arena dropped in 2020 and immediately became a fan favorite, as it evoked memories of the original snake game from old-school mobile phones. The upgraded version with the Dream Drop feature has many of the same aspects, but with five jackpots up for grabs.

The original Snake Arena has a maximum payout of 2,758.8x the stake. The Dream Drop version has the same maximum, barring the jackpots. With the jackpots, the maximum win increases to £10,000,000.

Symbols include four differently-coloured coins, a beer mug, ham, ring, and crown. There are two wilds that appear at different times—a regular-sized knight and a snake that can cover several reel positions at once.

The Wild Chase feature can be triggered randomly during the base game. When that happens, the knight and snake characters appear at opposite ends of the reels and peek out at each other. If they’re on the same reel, the snake expands and turns the whole reel wild.

When the knight and snakehead land on the same spin, the Free Spins round is triggered. A knight appears in a random position on each spin, and when players score a win, the snake slides to the knight, eats him, and expands by one position. Every time this happens, players win another free spin.

If the snake bumps into itself as it travels, the round ends. If the snake expands from reels 2 to 5, players win 1000x their bet.

A Dream Drop Jackpot Spin can be randomly awarded during the base game. When this happens, special reels appear and only certain symbols land. Five Dream Drop symbols trigger the Dream Drop Jackpots bonus round. (If five DD symbols don’t land, players go back to the regular reels.)

Relax Gaming made a great choice when adding Dream Drop to its already-popular Snake Arena. The game is packed with special features and will appeal to anyone who loves jackpot games.