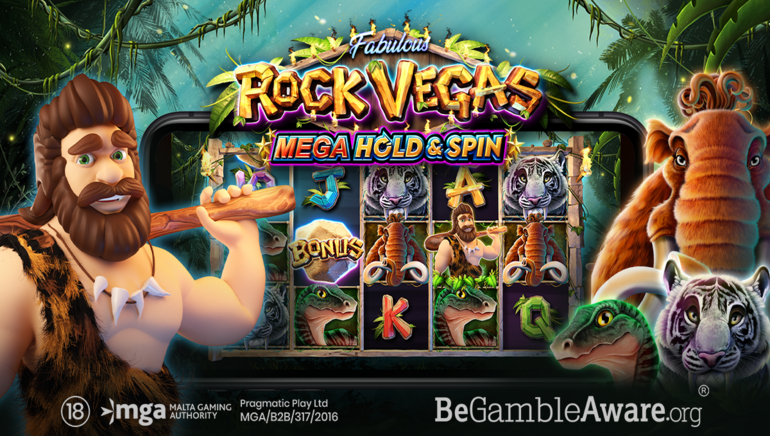 Players can take a trip back in time with the new Rock Vegas online slot from PragmaticPlay and Reel Kingdom. Launched on 24th January, it's a 5-reel, 20-line game that can be played on PCs and mobiles. The prehistoric theme comes to life with fantastic 3D effect graphics and animations.

Features include a Mega Hold & Spin respins game that plays out on a 10x10 grid of valuable rocks. A Mystery Multiplier trail sees rock values boosted by up to 500x, for potential total wins of 10,000x the stake.

The beautifully animated symbols include a white sabre-tooth tiger, mammoth, green dinosaur, and a caveman. He also stands to the side of the Rock Vegas slot reels, which sit within an ancient jungle setting. A lively tune plays out as the reels spin, accompanied by the sounds of wildlife.

Any 3 or more rock bonus symbols are enough to launch a Mega Hold & Win feature. The game changes to a 10x10 layout, where only colorful rocks and blank spaces appear. If 4 bonus symbols launch the round, the lowest value rock is removed, and if 5 or more trigger the feature, the second-lowest paying rock is also removed for the duration.

An initial 3 respins play out, with any new rock symbols locking in place and resetting the counter back to 3. Clusters of matching symbols merge to form giant rocks, with multiplier values of up to 500x.

Random rocks have keys attached and these move players along a Mystery Multiplier trail, where treasure chests unlock to reveal multipliers, instant cash awards, extra keys, or a retrigger of the whole feature. Wins can hit 10,000x in this round.

Rock Vegas is just one of several top-performing slots recently launched by Pragmatic Play. Others include Gold Party, Magician's Secrets, and Wild Depths. These are part of a range of desktop and mobile games that now exceeds 200 titles.

Up to 5 slots a month are released by Pragmatic Play, along with table games, Bingo, and Virtual Sports games.

Yossi Barzely, Chief Business Development Officer at Pragmatic Play, said: “Rock Vegas™ provides players with a thoroughly exciting experience, as well as a unique selection of bonus features that complement each other nicely.

“The prehistoric theme, in conjunction with the modern reels and engaging bonus features, stays true to our ethos of creating fantastic games and we can’t wait to see how our players respond!”