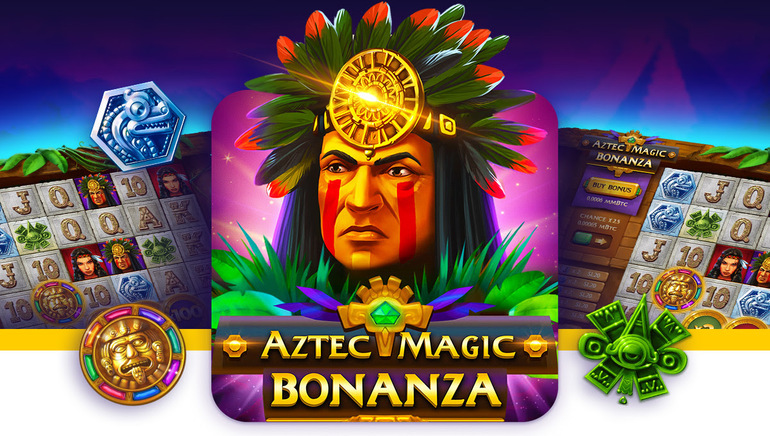 Aztec Magic Bonanza is a new slot from BGaming that's set to hit casinos on 17th February 2022. It's an upgraded version of one of their most successful titles.

On 17th February 2022, BGaming will launch an updated version of one of its biggest slots. Aztec Magic Bonanza features high-end images of a lost civilization across 6 reels and 5 rows of symbols.

Deep within the jungles of Central America lies the stone-effect reels of the Aztec Magic Bonanza online slot. Vines wrap around the 6x5 grid, and players will encounter a rich variety of symbols, such as an Aztec woman, and the serious-looking chief of the tribe.

A high standard of graphics is used throughout, bringing the magic of the Aztecs to PCs and mobiles at many of the best sites.

It's a game packed from reel to reel with extra features. Players will benefit from scatter symbols and free spins, with multipliers and a Chance x2 bonus. There's also a 'Buy' option that takes them directly to the bonus games on the next spin. A Refilling Reels mechanism can lead to several wins in a row as winning symbols vanish and those above drops down to fill the gaps.

Like others in the range, Aztec Magic Bonanza is available in several languages and customers can use many different currencies, including Bitcoin and other cryptos.

Aztec Magic Bonanza has an average return to players percentage of 96%. While BGaming is keeping some of the finer details under wraps, all of the magic is revealed in full on 17th February 2022. It follows on from the recent release of Aztec Magic Megaways, which plays out on a varying number of ways to win, and the original Aztec Magic slot, which continues to be a top-performing title for BGaming.

Based in Belarus, BGaming was formerly known as SoftSwiss. Their wide selection of slots feature at many desktop and mobile casinos, and they offer a full turnkey platform with over 2,000 games. A growing number of casino operators are turning to this stable platform and this is reflected in the rapidly-increasing number of staff at BGaming headquarters.

Other popular titles from BGaming include Avalon & The Lost Kingdom, Candy Monsta, and Bob's Coffee Shop. Each comes with a distinctive theme and style, and features can include free spins, wild multipliers, and gamble options that can turn modest wins into huge payouts.

Fans of the original can unlock the Aztec Magic Bonanza slot from 17th February, and we're sure that this exciting new game will introduce many more players to the magic of the BGaming range.