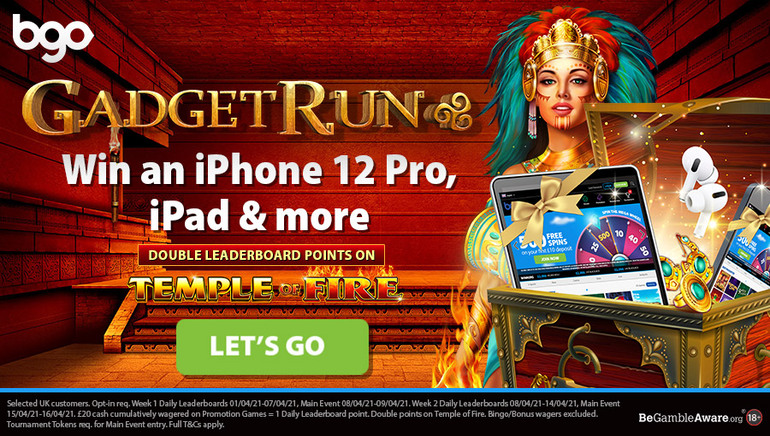 Win some of the coolest Apple gadgets at bgo Casino in a promotion spanning over the course of two weeks in early April.

bgo Casino has a brand-new promotion for its enthusiastic players and it is called Gadget Run. The name pretty much speaks for itself, as punters can hope to win some of the most coveted gadgets. iPhone 12 Pro, iPad Pro, AirPods Max and many other cool stuff are up for grabs in the promotion that starts on April 1. The campaign runs for two weeks and it is neatly divided into two challenges.

Climb the Leaderboard and Reap Rewards

The beauty of this bgo Casino promotion is that it rewards commitment and perseverance rather than pure chance. Players accumulate one leaderboard point for every £20 they wager in the casino and the top 10 players secure Main Event Tournament Entries. Those who agree to spin the reels of selected slots will also accumulate twice as many leaderboard points. Scores are reset on a daily basis, so players have another opportunity to secure the coveted entries the very next day.

The Main Event Tournament is the one that will actually produce the big winners. Since the Gadget Run spans over two weeks, bgo Casino players have two distinct chances to win a gadget. Only the highest score counts and seven players will claim iPhones, iPads, AirPods and Apple Watch Series 6. While everyone hopes to win one of the cool gadgets, bonus money on select prize games is also offered to those who come painfully close but failed to grab one of these prizes.

The promotion is subject to terms and conditions that players need to respect to qualify for the gadgets. Players need to opt in once during the promotional period and focus exclusively on promotion games. Bonus prizes are subject to 50 times wagering requirements, they expire after seven days and certain limits apply. Punters can bet a maximum of £2.50 until the play through demands are met and the maximum amount that can be won from bonus prizes is limited to £2000. Read the full T&C on the bgo Casino sites to make sure you’re in complete accord with the rules and fully enjoy this promotion.