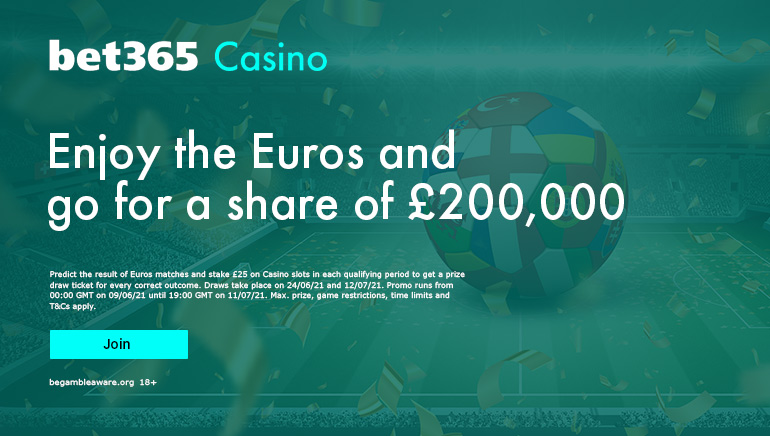 Football fans can enter the £200,000 Euros Predictor event at bet365 Casino for the chance to win cash prizes in one of two draws.

With EURO 2020 finally getting underway a year later than expected, bet365 Casino is marking the occasion by hosting a specialised promotional event in the form of the £200,000 Euros Predictor. Commending on 9 June 2021, the event will run until the end of the tournament on 11 July, by which point the winners of two cash prize draws will be ready to be announced.

As the name indicated, the aim of the promotion is for bet365 Casino users to participate by making predictions on the full-time results of the matches during the group stage. When the knockout stage arrives, the predications will then ask for the users to determine which nation progresses from the game in question.

On a match day, the participants are required to submit their predictions before kick-off and can be accepted once £25 has been cumulatively wagered on slot games at bet365 Casino. Tickets can then be earned based on the success of predictions and there will be an initial prize draw on 24 June and then a second one on 12 July.

bet365 Casino has developed the competition in a balanced manner that will see the £200,000 prize fund divided equally into sums of £100,000 for each prize draw. Users will only be eligible to win one of the cash prizes, which will be credited within 24 hours once the drawer has been concluded. According to the promotion terms, the funds must be claimed within seven days.

bet365 Casino is compatible with mobile and desktop devices and there are hundreds of video slots that can be played from Playtech. Some examples that have been identified by our experts would be Amazing Factory, Buffalo Blitz, Captain’s Treasure, A Night Out, Ice Cave, Miss Fortune, Gaelic Luck, Legacy of the Wild, and the Perfect Heist.

When entering the £200,000 Euros Predictor or any other promo at bet365 Casino, users are advised to follow the terms and conditions. What can also be revealed is that bet365 operates under the regulation of the UK Gambling Commission and that responsible gaming tools are provided to maintain players’ wellbeing.

Casino in the Spotlight: Jackpot.com Casino